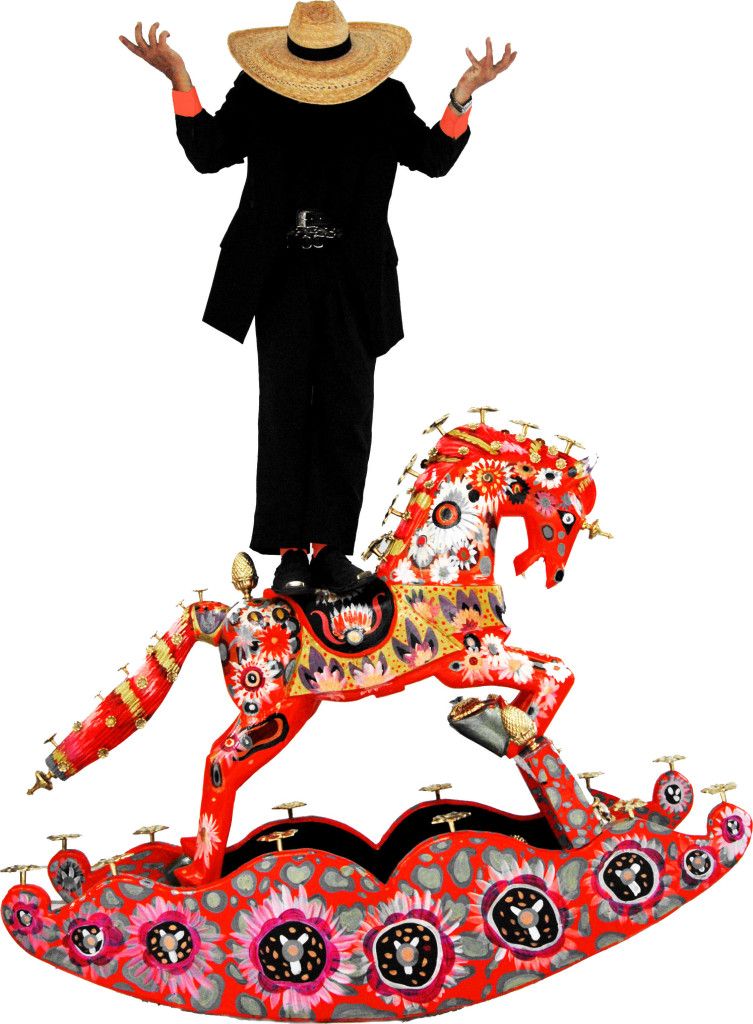 Official Website for the Skater and Artist Toller Cranston. 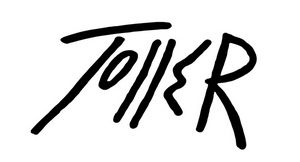 Toller Cranston – The Painter: An Exhibition of Original Works

Toller Cranston (1949-2015) had the distinction of being an internationally acclaimed Canadian painter, Olympic athlete and a Member of the Order of Canada. Toller always considered himself an artist first. He painted actively throughout his competitive skating career, making enough money from the sale of his art to cover his skating expenses. His first solo exhibition was held in the home of his skating coach, Ellen Burka. Today his original works his paintings have been featured in more than 250 exhibitions around the world and are included in prominent private and corporate collections worldwide. His distinctive painting style, rich in global influences, androgynous figures, extraordinary florals, and invented landscapes along with Dali-esque angular forms that shock and alter perceptions attract a universal audience. His style hints at various art movements (Surrealism, Cubism, Expressionism), but is ultimately only definable as Toller’s. This exhibition features a selection of 15 original oil paintings and other memorabilia from the Toller Cranston Estate Art Collection. 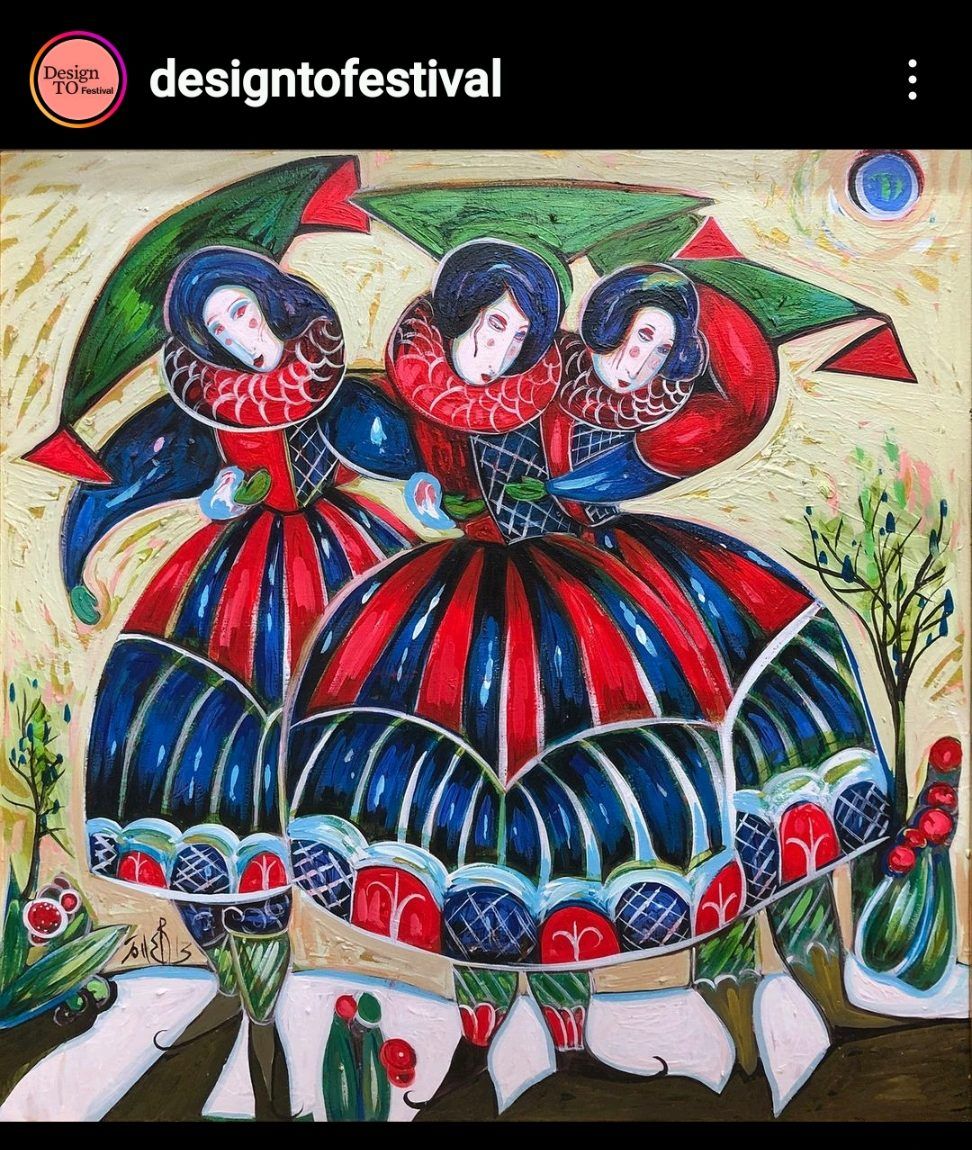 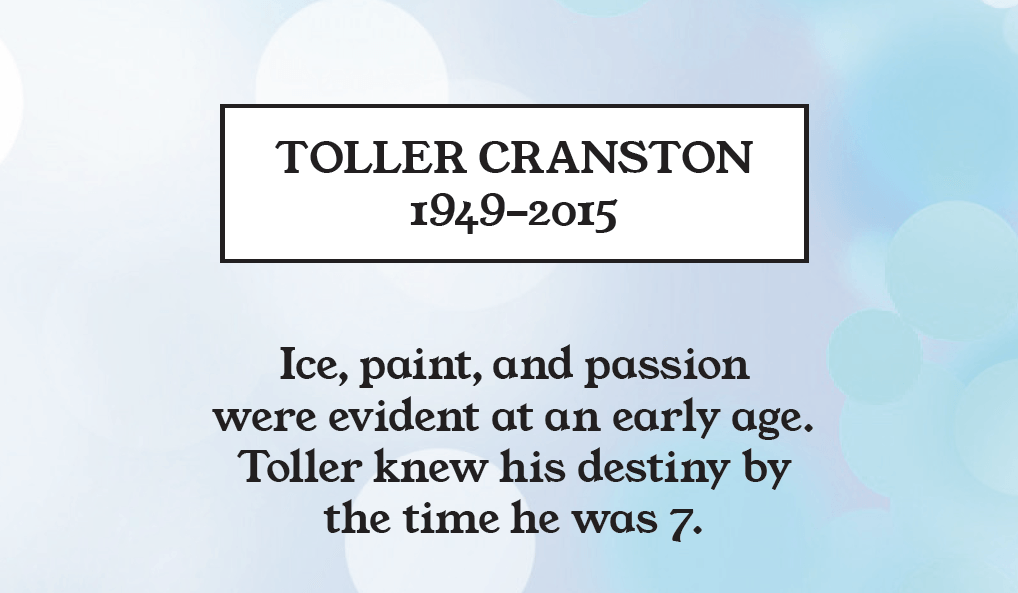 Thanks to you all for your love and support. 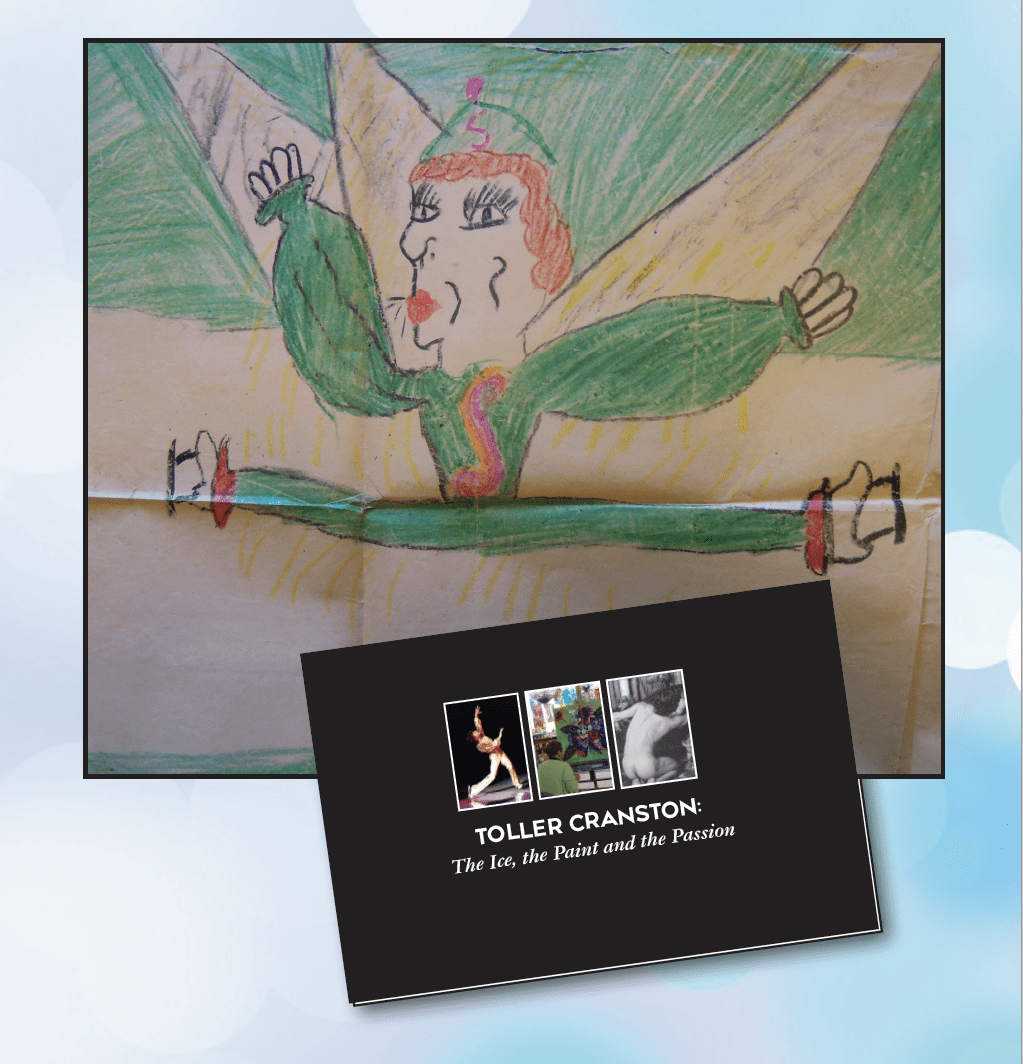 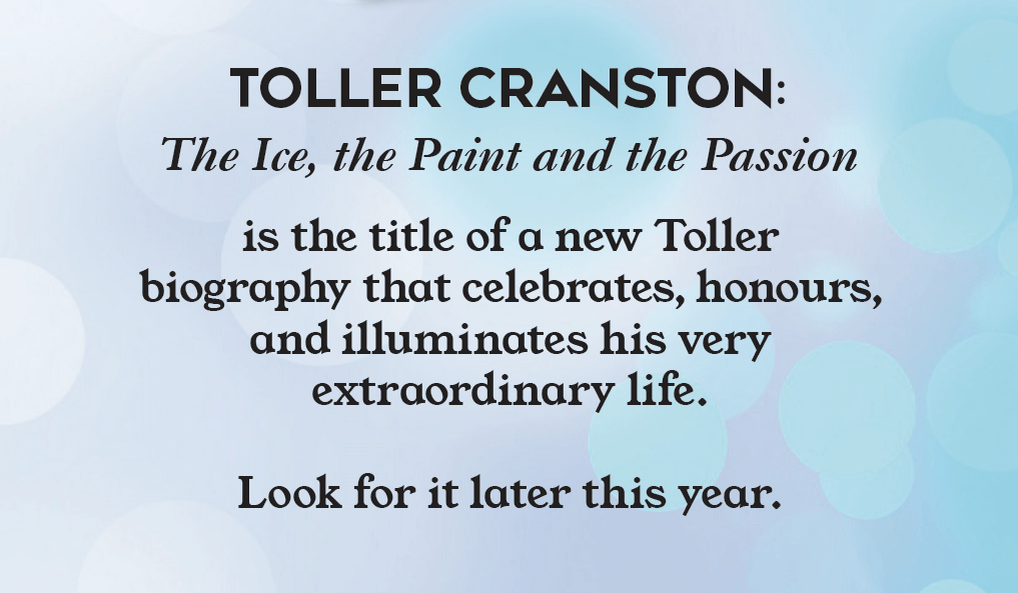 We are super pleased to let you know  that Toller Cranston: The Ice, the Paint and the Passion has just been announced as a Finalist for the Sutherland House Book Prize. The Winner will be announced early in the new year.

We are ecstatic to be in the mix with a fabulous group of contenders. You can read more about the finalists here.

Many of you are aware that the last few years have had their share of challenges. It is very gratifying as this year winds down, to report that the future for Toller looks bright. One might say dazzling. And sparkly.

Thanks as always for your interest and support.

Season’s Best to all.

This is how the entry is described:

3. Toller Cranston: The Ice, the Paint, the Passion, by Phillippa Cranston Baran.

“If something is worth doing, it is worth overdoing” — Toller Cranston

For millions of people worldwide, there is no need to say Cranston. He was Toller. Creative. Flamboyant. Outspoken. Whether he was winning Olympic medals, painting 20,000 paintings, judging a beauty pageant with Donald Trump, or performing for an audience that consisted only of his friend the Prime Minister of Canada, the King of Jordan, and their wives—he was a true creative force.

For decades, this Canadian icon and internationally recognized celebrity amazed, outraged, and inspired. He showed immense courage in the face of insufferable establishment negativity, stayed true and authentic, spoke up, spoke out, and did the work. He changed a sport. He changed attitudes. He changed lives. He motivated others to be brave, dream big, and chase their destiny.

Much has been written about Toller Cranston. Much has been written by Toller Cranston. Now, from the sister of an icon comes the story of a complex talent who was funny, flamboyant, and deeply human. Toller Cranston: The Ice, the Paint, and the Passion is about more than the extraordinary achievements and legendary battles: it captures the voices of those who knew Cranston, admired him, competed with him, and were inspired by him—a cohort of world and Olympic champions, curators and collectors, LGBTQ artists and performers, as well as a host of colourful characters and fans who intersected with his extraordinary life. Together they reveal the profound and lasting impact that Cranston had and continues to have on other people.

Phillippa Cranston Baran is a former university film professor and award-winning writer/producer. She has a faded scar on her left thigh acquired at age twelve when her younger brother kicked her with his skates because she refused to twirl him. 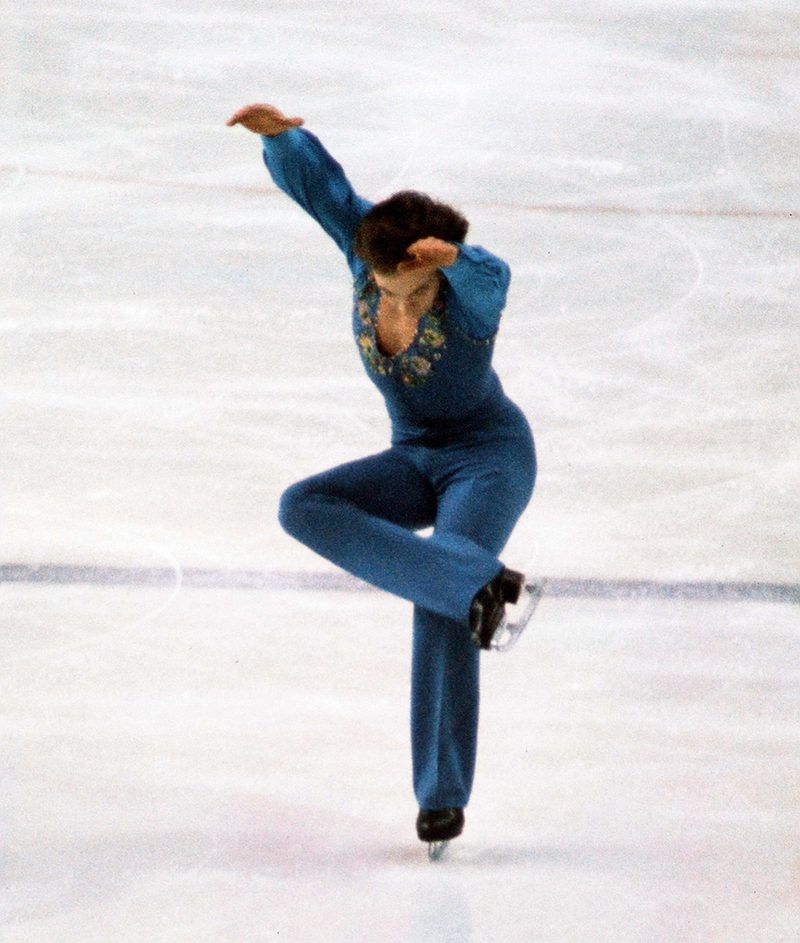 “Artistry. Creativity. Passion. Those are three of the many characteristics that Toller Cranston held on and off the ice.”

“As an esteemed ice skater and passionate member of the community, Cranston urged those around him to celebrate life with the same amount of dedication. As the 1976 Olympic Bronze medallist, his legacy has continued through the creation of the Toller Cranston Memorial Fund, which provides financial support to young skaters who hold the same qualities as Cranston.”

April 20 marks what would have been Toller’s 73rd birthday.

He is remembered by the skating world during times of Championships and Olympics.

He is remembered by the collectors and clients who love and value his paintings.

He is remembered by the young people in Mexico who are graduates of the Yo Inc. entrepreneurship program that is delivered in his name.

He is remembered by scholars and researchers who have access to the Toller Cranston Library at the Biblioteca Pública.

He is remembered by those who loved, supported, and admired him.

He is remembered. Always.

Be bold! Fill your canvas!

Best to you all, 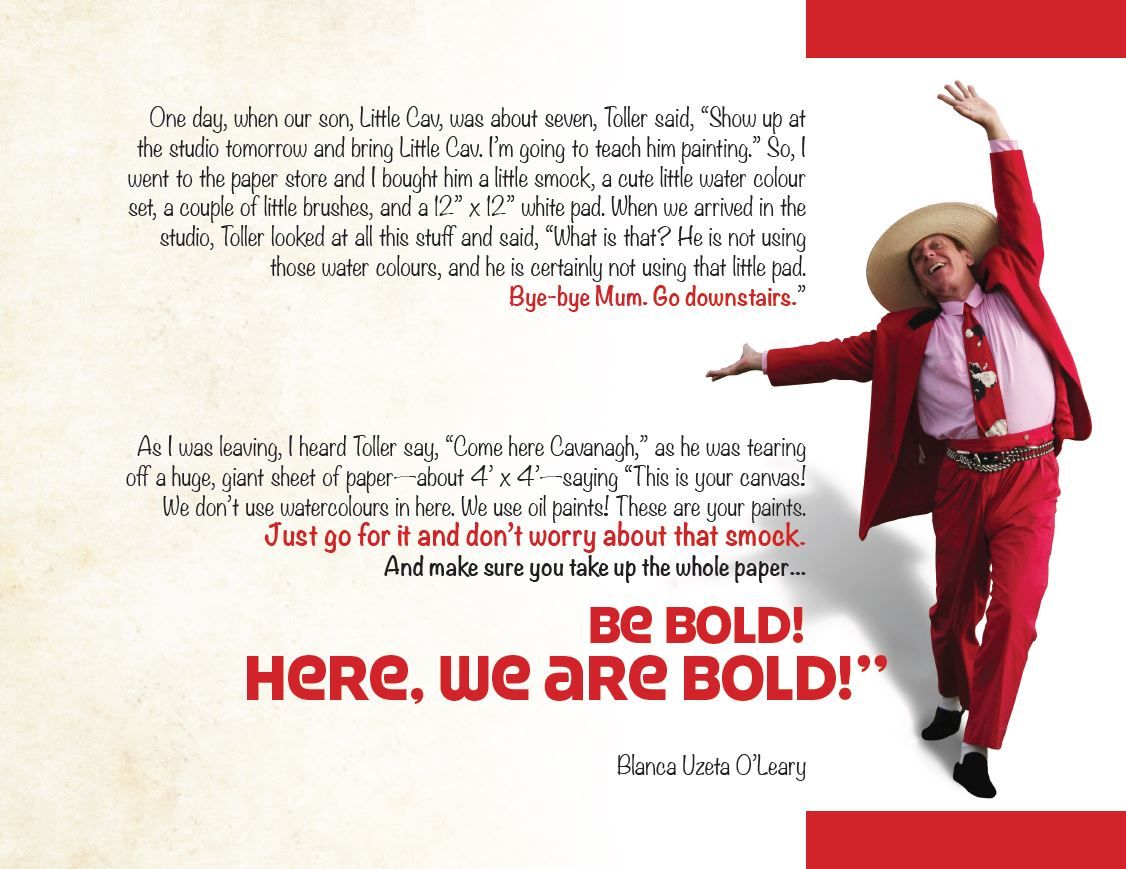 Toller Cranston: The Ice, the Paint, and the Passion

NEW BOOK IN THE WORKS !

With his death in 2015 at age 65, Figure skating lost a trailblazer. Canada lost an icon. The creative world lost a creative force. He became a legend. His name is Toller Cranston.

From the sister of a figure skating icon comes the stories of a creative genius who was funny, outspoken, and a fierce advocate for young talent. This book is a celebration of his life, a tribute to the values by which he lived, and a road map for living fearlessly. 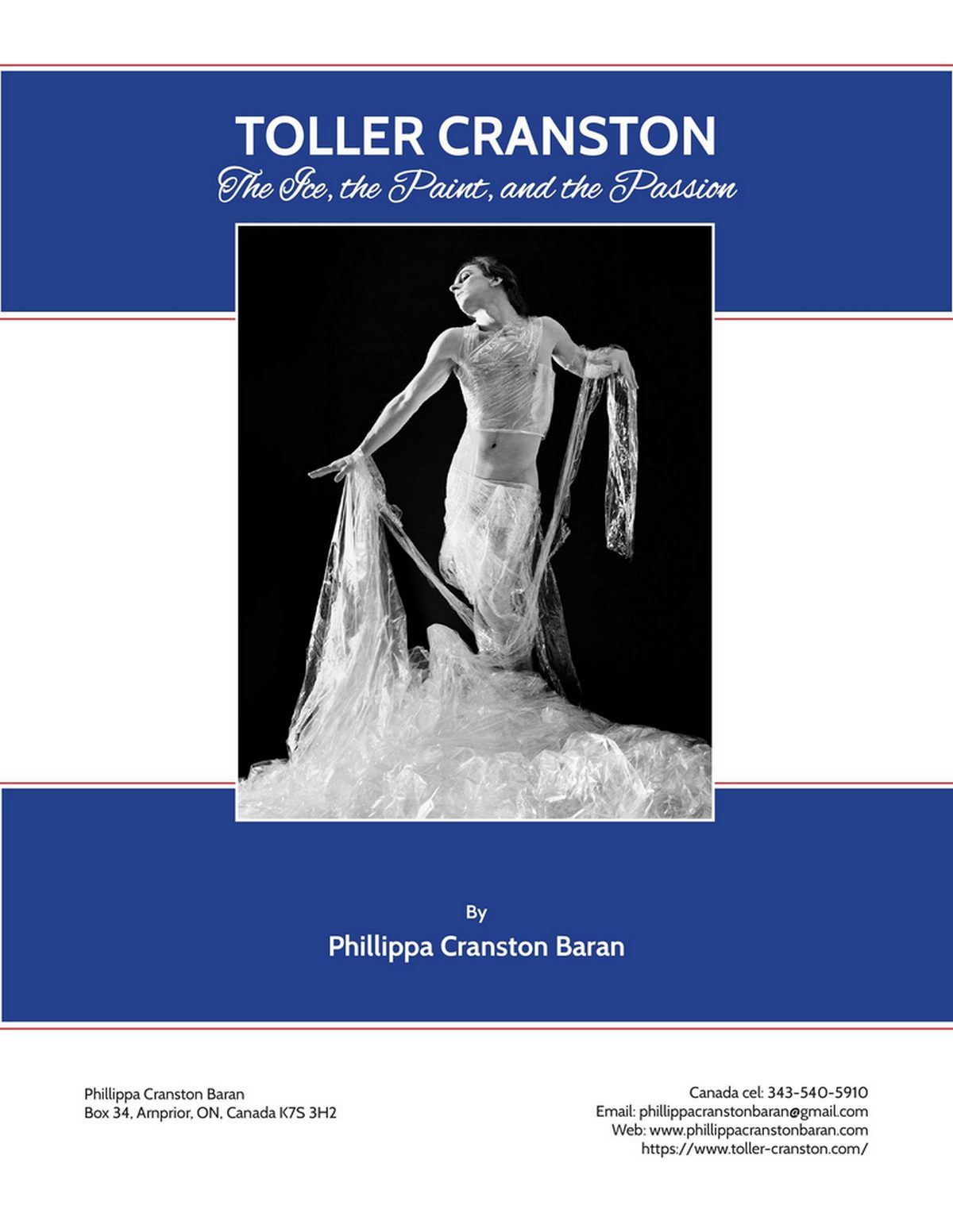 In a special Skate Ontario Presents episode on Sunday, January 9, the #3Turn3 crew welcomed the chance to celebrate Canadians’ week and reminisce about World and Olympic bronze medallist Toller Cranston, whose death first made headlines during the Men’s Figure Skating Free final at Nationals in Kingston, ON in 2015.

The Podcast was joined by Toller’s sister Phillippa Cranston-Baran and Toller’s lifelong friend and British skating legend, Haig Oundjian. Together they are ensuring that Toller’s legacy lives on in an award for skaters that bears his name.

Here is a reminder of how young he once was…

And how beautiful…watch this video created by Leo Oppenheim of Floskate.

And how absolutely outrageous…

Let me share one tiny anecdote from Jeanie Gooden, a wonderful contemporary artist who enjoyed a long relationship with Toller. They were colleagues, friends, professionals, artists. Jeanie wrote:

My favorite story is introducing Toller to my mother. We rang the bell and were  ushered into the property. Down the path came Toller wearing a bright red suit with his huge brimmed hat. He carried a single rose. He knew that my Mother was a minister’s widow and that she was very nervous about visiting Mexico.

With a sweeping bow, he presented the rose and said, “Welcome Margie…while you are here I think you must drink more whiskey and have an affair.” Mother, now  90, still laughs about that moment. She will never forget Toller nor will anyone who ever met him.

Because of you, each and every one of you, Toller’s spirit lives on. There are many more birthdays to celebrate. And a very beautiful Toller book to launch. 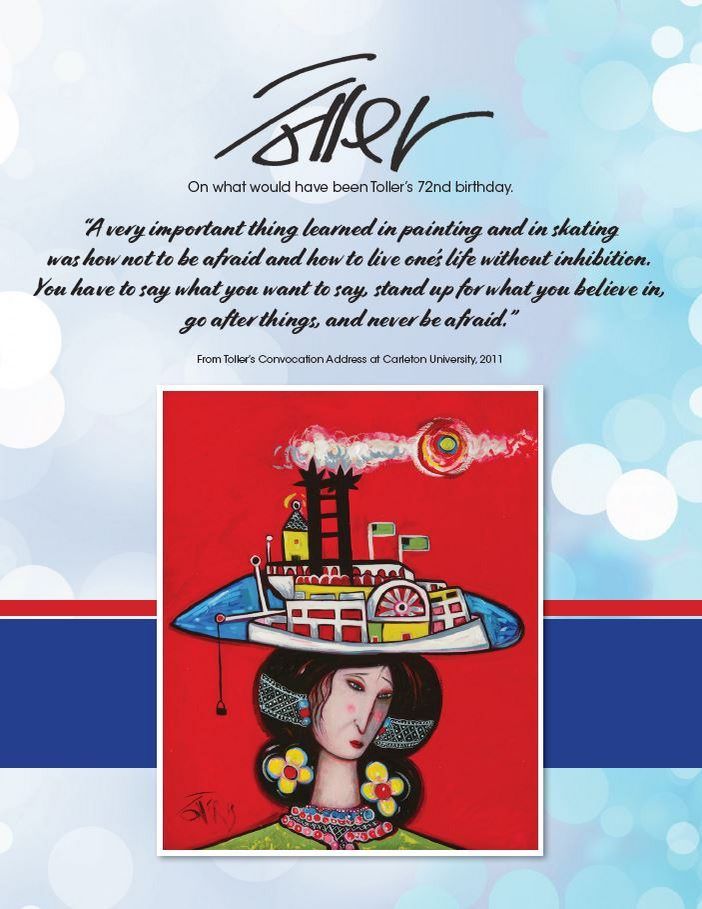 Although 8 years have passed since Toller died suddenly in Mexico, the power of what he stood for, what he believed in, and what he achieved lives on.

In 2019 there were exhibitions of Toller’s work at Artworld Fine Art Gallery in Toronto, the Museum of Northern History in Kirkland Lake, and the Temiskaming Art Gallery in Northern Ontario.

Yo Inc, an innovative youth Entrepreneurship program has been created in Toller’s name and will launch in San Miguel de Allende Mexico in March 2020 in a partnership with SmartSpaceHub.

Talks are underway to establish a Chair in Toller’s name at the Banff Centre for Arts and Creativity.

Have the best year everyone,

Courage. Creativity. Expression. That was Toller. 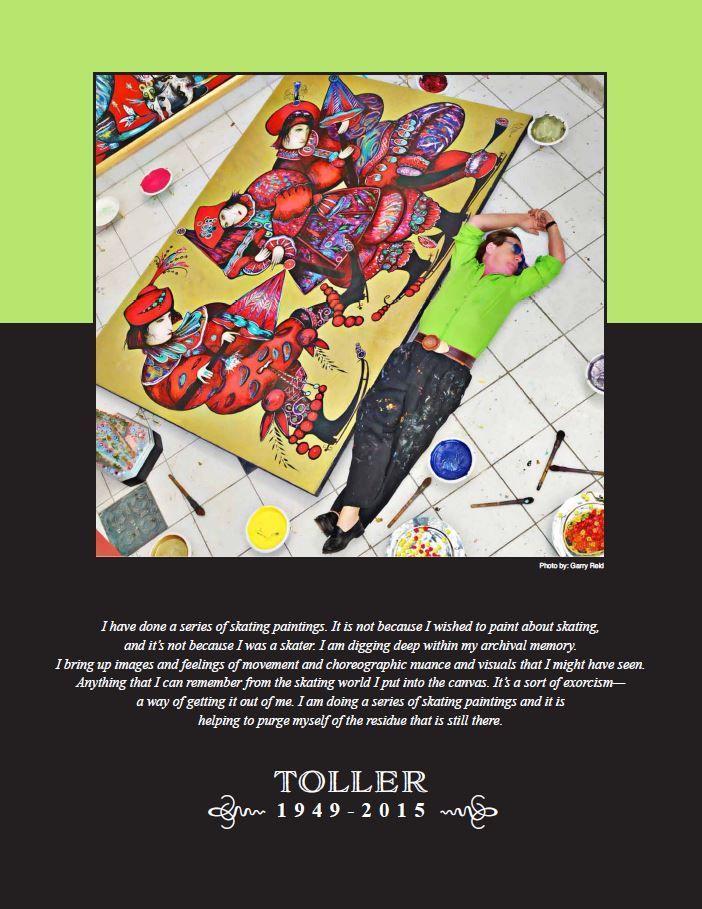 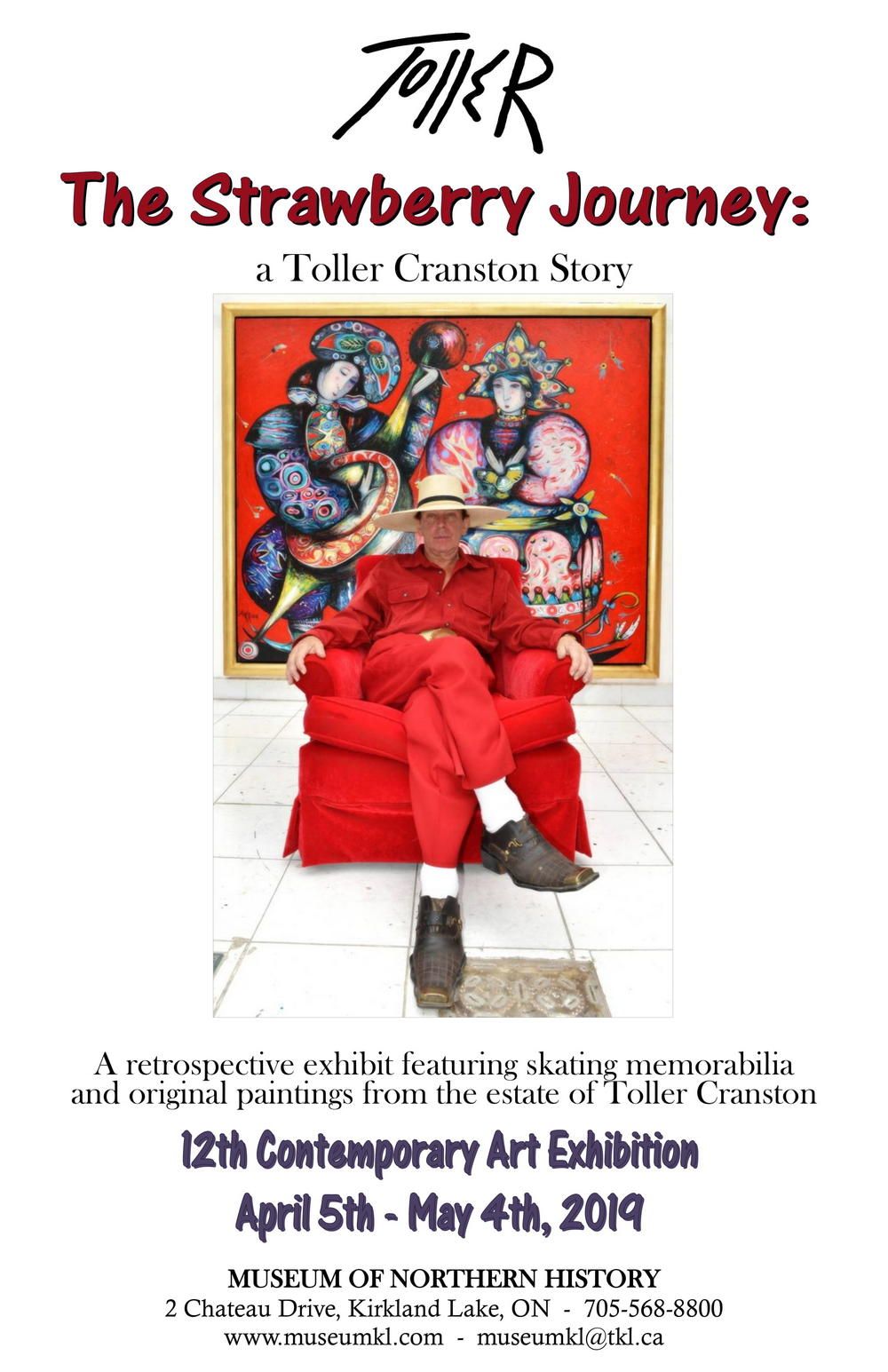 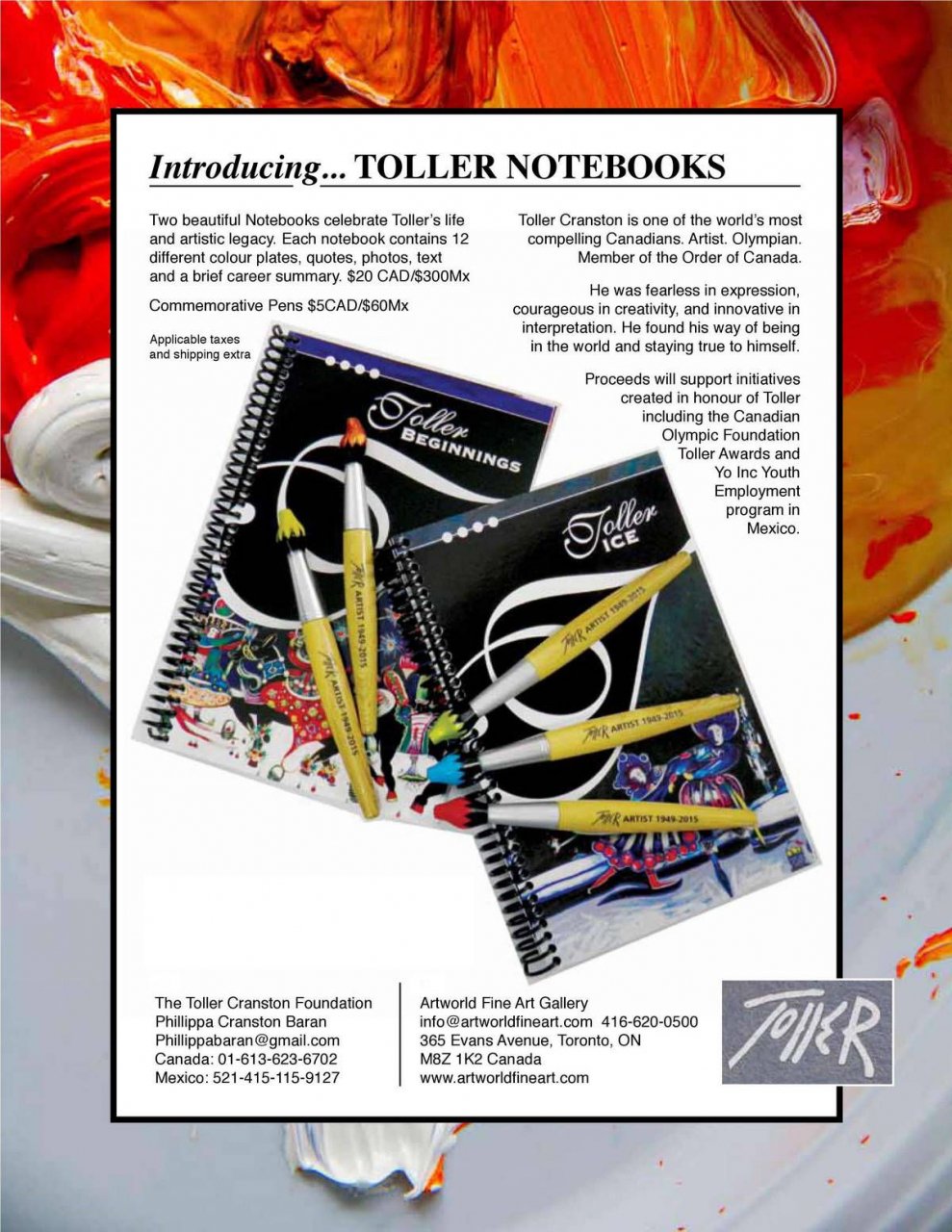 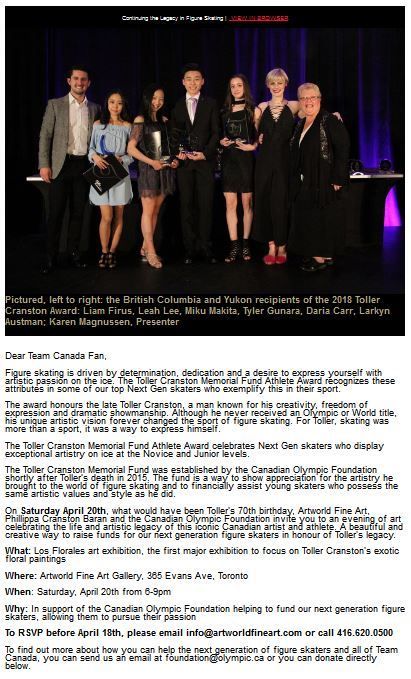 A Tribute to the King of Skating